Disclaimer: All complaints, rants and raves!

The very sole purpose of my blog, was to write what was happening with me : a story that I was telling myself.

With time, I would meet many folks who had the same passion and I would meet some, who would say, " I used to Write but I don't write anymore".

I understand the mood swings that one undergoes and one has to bear the burn outs, when one is good at something. What I have realized is that you can only have handful of true friends, who will be happy with your achievements, and the rest, all are acquaintances, who will just not be happy if you succeed or just try to succeed. If you have a dream, and if you want to live that dream and if someone doesn't support it, it's fine. If someone just tries to belittle you or simply discourages you or puts you into a position so that you have to question your own existence or capabilities, leave them no matter what they are to you. Just quit your job or leave that relationship or disown them. Pursue what you feel is right for you, pursue what you are passionate about, I hope not Drugs though.

A lot often, we are put into situations whereby we have to question ourselves, and a lot of times, when events after events unfold, we are made to believe that we cannot achieve what we wish or we are assigned. However, we need to contemplate that on the first hand, how did we land up into this situation?

Over the years, I had kept a lot to myself, that I had stopped writing or painting or reading and a lot of thoughts would just come to me, and I never expressed them. I was scared that I too would be judged, and it wouldn't be the last time that folks would come and say upon my face : Why do you write this or what do you get after writing so and so? And the list would go on, the mockeries which gave me reasons to doubt myself.

With time, I kept quiet and I stayed out of many quarrels, I chose not to write against many issues which were just inhuman. In all those, I chose not to write, what was the point? Why should I even write? To me, it was more of not voicing out! Who am I? Does my opinion even matter?

Upon my work front as well, I had always been unlucky. I was always assigned a job which was not taken by many and most often, the projects that I embarked upon were failing projects. The tunnels that I worked upon were geologically adverse and their preliminary studies were not done. It didn't even take us two months to face one of the worst case scenarios that highest regarded designers from India had to make their visits. For the first time, Class VI rocks were declared in entire project.

With time, I felt I was cursed and I felt maybe my stars weren't aligned and no matter how much I worked hard, I saw myself failing. I guess, when we have too many hobbies and too much of passion for everything, we tend to mix up our failures that we eventually march towards failing.

I have been too stressed for a while that I had started to forget small things, being forgetful was never me. I was talking like a lunatic.

When we lose motivation, confidence and a bit of memory, we start to question ourselves and our own existence. Hence, this is the time, when one needs to take a step back and then reminisce upon everything, look back how one reached upon a situation and how one can move forwards.

However, the story is not theirs and it is about the folks who as strangers introduced themselves and have expressed their views about how they read or used to read my blog posts before I stopped writing. It is about those folks who eagerly wished for their portraits to be sketched by me, and folks who framed those few artworks which I thought were of no good and had actually thought of throwing them away. Some of them have even put these works as decorations upon their walls. It is about those folks who introduced themselves as engineers and wished to learn from me.

I know I am not some god damn prodigy kid or a living freaking Michelangelo, and there is no such Sistine Chapel that we are painting. But at times, a lot of people out there, want to put you down upon their secret closets of their own mistakes, and when you voice it out, you become their reapers.

See that those folks who asked me once not to write, never maintained a blog and were shitty writers themselves. They could never write. The ones who had written books and were constantly known for their works were always encouraging everybody to write. Not only me.

The folks who were great artists always pointed out how I could improve and taught me a lesson or two. They never asked me to quit sketching.

The folks who were great engineers were always curious and they themselves were never satisfied with their knowledge and kept their egos aside and asked our opinions upon matters. When we went wrong, they corrected us and taught us. When we thought we had learned something new, which we had, they too were too curious and didn't mind learning from us. They were not arrogant.

Hence, why do I need to lose motivation for the folks, who can't write, who can't sketch or who are not even engineers? Let alone, someone doing everything at one go? 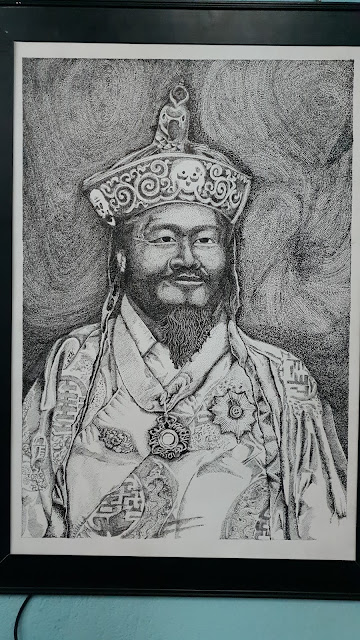 The portrait of The First King took me some nine months to complete. I realized that it would have taken me a week had I continuously worked upon it. It was my art therapy product, however, it did make me feel that at least, if we consistently work upon something, when we complete it, we feel a greater satisfaction. I don't know, perhaps, it might have a billion or millions of dots in it, and it was frustrating at times, when it didn't get completed. However, now that I have, I wish to complete one such sketch in a year.

Ps: I know, the article was a long one and it was a very much narcissistic one, but then again, writing is all about expressing, so is art. Don't mind my grammar, I don't edit after writing and I am writing after ages.
By Dawa Knight - December 25, 2019
Email ThisBlogThis!Share to TwitterShare to FacebookShare to Pinterest
Labels: Spontaneous Write UPs

The Millennials of Bhutan

Who are Millennials? Well, this is the generation born between Generation X and Generation Z, often considered from early 1980s to mid 199...